A pot made of platinum

Before I moved to Maymyo, I sometimes treated myself to a buffet dinner at Sule Shangri-La. There I always chose a table at the window so that I had a view of the old Dagon Hotel (formerly called Orient Hotel). It was located right next to the brick building that still houses the Myanmar Bible Society today. 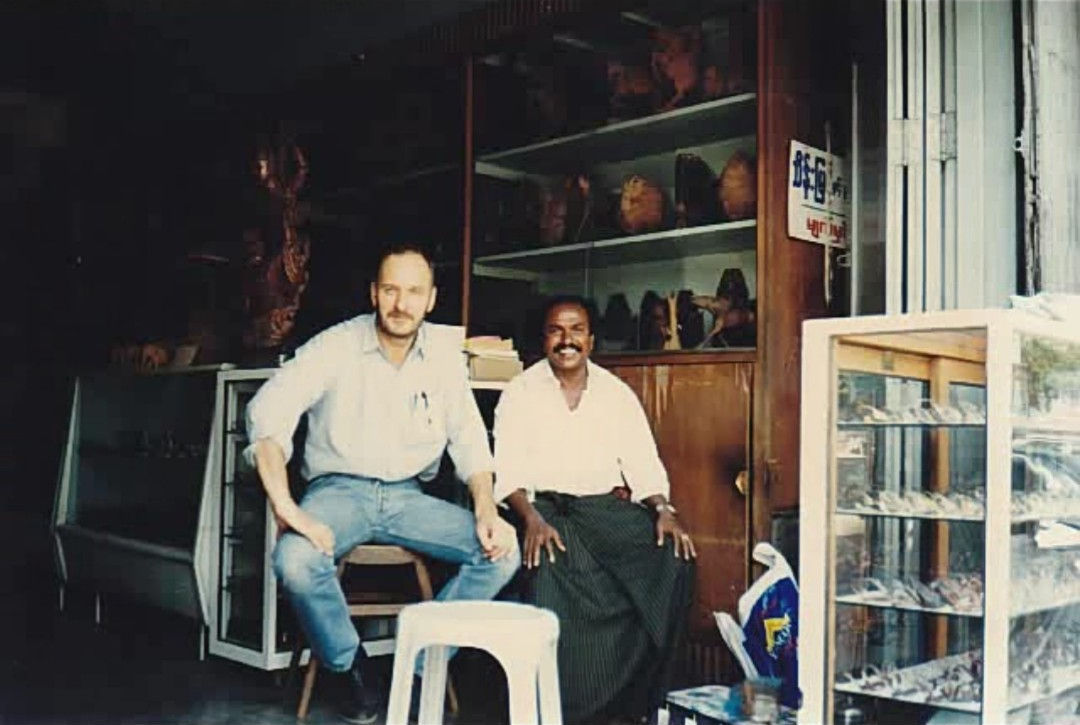 And why? Pure nostalgia! I used to stay there during my visits to Yangon when I couldn’t afford a better place. The hotel was located on the second and third floor of the building. It was one of seven in town that were open to foreigners. The ‘rooms’ were partitions made of plywood, furnished with a bunk bed, a small table and a chair. But I guess for five dollars you couldn’t expect much more. There was also a deluxe room. For a long time it was unaffordable for me. The bathrooms (one per floor) were in the hallway, as were the toilets. That was the case with most of the rooms in the Strand Hotel at that time, too. Where the Sule Shangri La stands today, there were many beautiful old houses. There was a cinema and the ‘People’s Patisserie’. With a bit of luck you could get the ‘Working People’s Daily’ there.

Then I kept thinking about a story that happened on a beautiful December day in 1980. I had finished my midday nap, had a shower and had descended the steep stairs unscathed. As well as the meeting place of Rangoon’s drunkards on the first floor. Downstairs in the bakery I had enjoyed a fancy cake and a cup of tea. I was heading towards Sule Pagoda to meet my Tamil friend Victor, a reliable black market money changer. To cover up his illegal business he did a little window dressing, selling spectacles. His business was located near the famous Diplomatic Store (nowadays: Sule Plaza), a forbidden paradise for the ordinary Burmese. I had just crossed Anawrahta Street, when a well-groomed Burmese man in his early 30s approached me. He was wearing a green longyi, a blossom-white shirt and the usual slippers. The inevitable Shan shoulder bag hung over his shoulder. After a rather flowery and long-winded introduction in excellent English, during which he looked around nervously, the man finally came to the point. He told me that he was the son of a rich family. Due to the mismanagement of the socialist government they had become completely impoverished. Everything had been taken away from them, even the bicycle. It was only through an ingenious trick that the greatest family treasure could be saved: a bar of platinum! They had melted it down and turned into a vulgar cooking pot – but a rather special one! To camouflage it, they had blackened it. And what the man secretively pulled out of his shoulder bag, really looked like an ordinary cooking pot. It was amazingly heavy. Among all the people in the busy street he chose me, the shaggy hippie with the fuzzy beard and striped shirt as prospective buyer. He told me that the value of the pot was more than twenty thousand US dollars. However, due to the extraordinary circumstances he would sell it to me for a mere five thousand! What a bargain! And what did I, the narrow-minded traveller who was in Rangoon for the sixth time in his life, say? ‘A platinum cooking pot – that’s really the biggest nonsense I’ve heard in my life.’ And might have missed the deal of a lifetime! I laughed at him and parted with the man.

But I should have known better! Hadn’t the Bodhisatta* himself, the later Buddha Gotama, traded a very similar pot (made of gold) for worthless junk and a few copper coins? At least this is what the Serivanijan-Jataka** tells us. The story can be found at Ananda monastery in Bagan. And I even had been to that place! But, of course, I didn’t understand the meaning of the murals then. Here is the story: once the Bodhisatta was incarnated as a dealer in pots and pans in the city of Serivan. Together with a colleague he roamed the villages in the area and sold his goods there. When the two of them arrived in one of the typical one-street villages, they split up. One of them worked the houses on the right side of the street, the other one the left side. Then they had a cup of tea together on the roadside. Afterwards both of them worked the other side of the road. 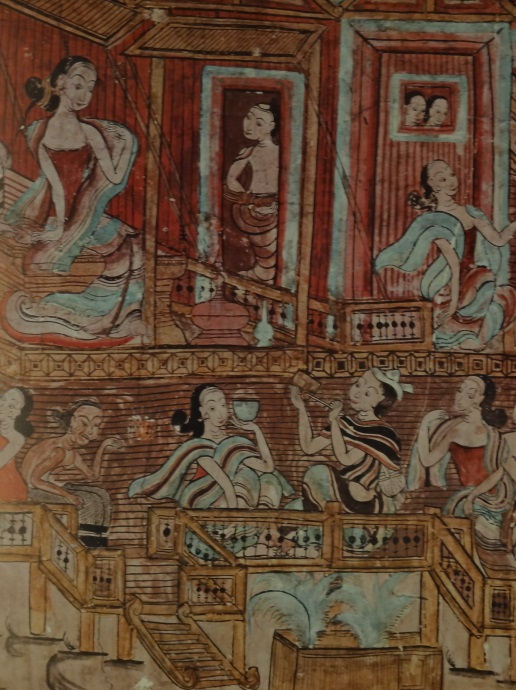 So it happened that the Bodhisatta’s colleague, a greedy fellow, on his tour passed a poor house where an old woman lived with her daughter. Both had been rich in the past but had lost everything due to unfortunate circumstances and lived in poverty. Only an old, dented, soot-blackened cooking pot had remained from their former life – and it had become quite perforated, so that no food could be prepared in it. When the pot dealer came by, the old woman invited him in and showed him the pot with the request to exchange it for a new one. ‘An old pot for a new one? Why should I do that?’ he asked. The old woman began to cry and so he stooped himself to take a closer look at the pot. He scratched the bottom of the pot and turned pale – the pot was made of pure gold! But he didn’t let on about it and said to the woman: ‘All right, I’ll exchange the pot for a new, smaller one, but you have to give me three more copper pieces!’ – ‘Lord, we have no money at all! Be merciful, take the pot and give us a new one – we haven’t eaten something warm for three days now!’- ‘It’s only three copper pieces! 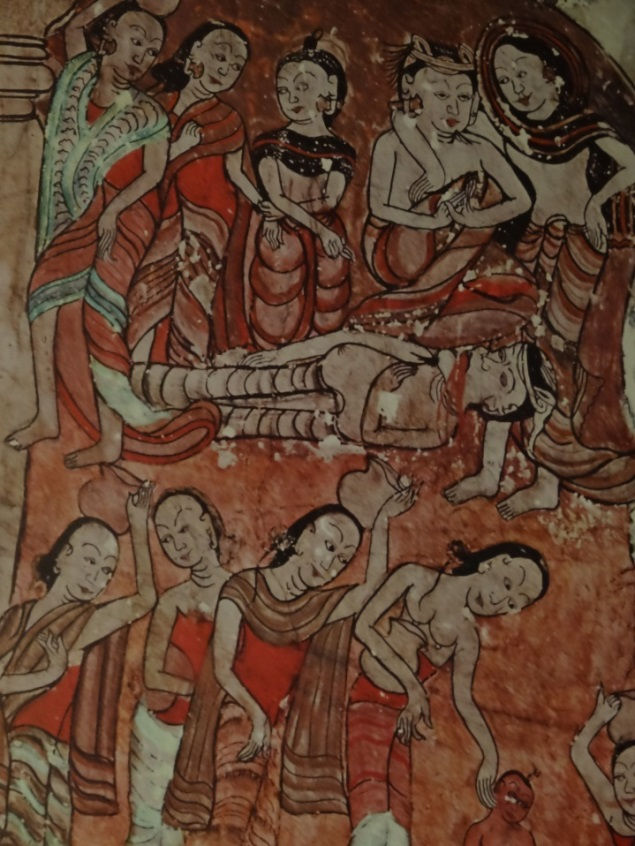 You can borrow them from your neighbors! I’ll be back after a while. Get the money in the meantime!’ was the harsh reply. And off he went – of course with the firm intention to take the golden pot with him later. The two women stayed behind crying. But the deceitful merchant had reckoned without his host. Not much later the Bodhisatta passed the house of the women. They poured out their troubles to him and out of pity he also had a look at the pot. He scratched the bottom and came to the same conclusion as his colleague: the pot was made of pure gold! ‘My dear lady’, said he, ‘this pot is made of pure gold! It is worth far more than all the goods plus the cash I have on me. I’d be a swindler if I agree to this barter!’. ‘Sir, have mercy, please!’ pleaded the old woman and after much back and forth the Bodhisatta changed his mind. He handed over all his wares and all his cash to the women. They gladly allowed him to keep some money for the ferry ride across the river. He took the pot and went home without waiting for his colleague. It did not take long before the greedy man came to the women’s house and asked: ‘Well, did you manage to get the money?’ – ‘You rascal!’ screamed the old woman! ‘Your honest colleague was here and told us the truth! Get out of here before I chase you out with my broom!’ Furious, the swindler threw his goods and all his money on the floor and stormed away to confront his colleague. When he reached the river, he saw the Bodhisatta midstream on the ferry! He screamed and shouted his name obsessively and summoned him to come back. But his colleague ignored him. The evil man’s heart ‘became hot, blood rushed out of his mouth and his heart broke like the clay on the bottom of a dried-up pond…’ Only in passing, it should be mentioned that the crook was later incarnated as the archenemy of the Enlightened One, Devadatta. Out of greed he tried to assassinate the Buddha several times and failed. Consequently, he descended to hell. If I would have known this story then, I’d probably be a rich man today. But to be honest, I didn’t have five thousand dollars on me then either…

*Bodhisatta (Pali, Bodhisattva/Sanskrit) means ‘enlightenment being’ on the path to Buddhahood. They can take the form of humans or animals. Usually, they have made a resolution to become a Buddha and have received a prediction or confirmation from a living Buddha that this will be the case.

**Jataka (lit. birth stories) are the canonical stories of the previous existences of the historical Buddha. In these existences he is called Bodhisatta (Pali, see above). Traditionally there are 547 canonical existences. Some jatakas are rather short, others of epic breadth. The first is the Apannaka –jataka. It tells the story of two traders who travel in the desert. The first one meets a miserable death while the second one (the Bodhisatta) arrives safely at his destination – thanks to his wisdom. The last jataka (No. 547) tells the story of king Vessantara, who gives up all his possessions (including his wife and his children). He acquires so much merit that he is consequently reincarnated as Gotama (Sanskrit: Gautama), the historical Buddha. That doesn’t mean, however, that this number embraces all the previous existences of Gotama. There may have been countless others. According to the Burmese tradition there are three additional ones, bringing the total to 550. One of them is the hermit Sumedha. His image can be seen in many temples.