Thingyan 2020 will definitely be remembered for a long time to come. For some (especially the elderly) it must have come as a blessing in disguise. No blaring music, no drunkards in the street. But it certainly was a big disappointment for the youngsters. And for those who make a lot of money with grand-stands and trucks during the festival. Musicians and dancers also suffered. However, I wish all of you a happy new year 1382 Burmese Era. The thekari’ era has been used widely in South East Asia, but nowadays Myanmar seems to be the only country where it still holds some significance. It is used to mark traditional festivals. Some of you might have wondered why the festival dates in Myanmar are constantly shifting. One year Thadingyut is in October, the next year in September. New Year, however, is always on 17. April. The reason for this is that the Burmese are using a lunisolar calendar. The months follow the moon calendar, but the years follow the solar calendar. Therefore, a leap month (called 2nd Waso) has to be added regularly.

So, what exactly happens on Thingyan? The Burmese word is a corruption of the Sanskrit word Sankranti, which means transition. On this day (approximately) the sun enters the house of Aries. As you all know, the festival starts on 13. April. Not too long ago, the Thingyan holidays might have lasted for ten days. Nowadays it has been shortened in order to adapt to modern times. But don’t worry: the ‘missing’ days will be added to other festivals. 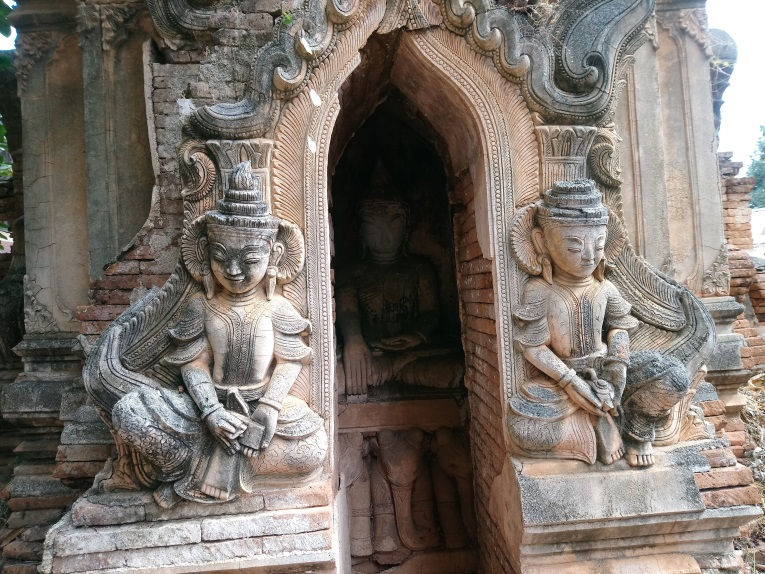 On 17. April Thagyarmin (Sakka), the king of gods and ruler of Tavatimsa comes down from his heavenly abode in a beautiful chariot. It is driven by Matali, who carries two books. One with a golden cover, the other one with a cover made of dog leather. One contains the good deeds of the believers, the other the evil ones. You may guess which book is for which deeds. Then Thagyarmin will reward those who behaved well and punish those who didn’t. The photo shows the entrance of a ruined temple in Indein (Inle Lake). On the left hand side you can see Matali writing something in his book. On the right hand side you can see Thagyarmin with a vase holding the nectar of immortality (amrita, ambrosia). You can see his statue on the platform of Shwedagon pagoda at the planetary posts, too. He’s the one standing behind the Buddha statue holding a conch in his hands. From this conch he’s pouring the nectar of immortality over the Buddha statue. 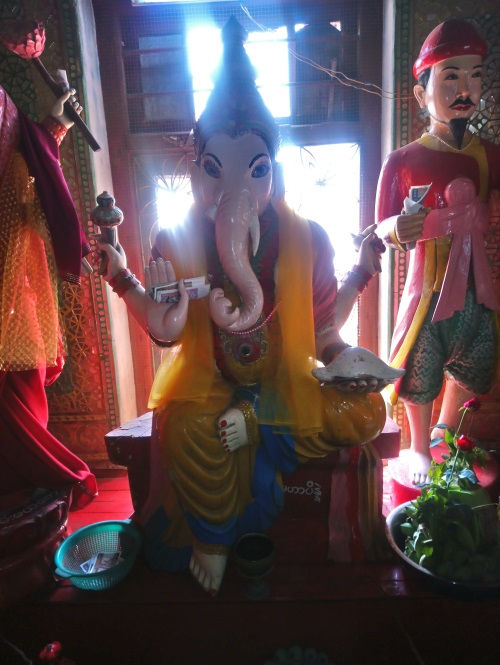 Of course, there are various legends regarding the water festival. One of them tells the story of the Red Brahma (Athi). He made a bet with Thagyarmin, claiming that the week has eight days. The winner would have to chop off the loser’s head. From the Burmese point of view he was right. But that didn’t help him. So, Thagayarmin reluctantly severed his opponent’s head. But in order not to kill him, he sent out a sage and told him to bring the head of the first creature he encountered. This happened to be a golden elephant. Since then he is known under the name of Maha Peinne (great delight). Because a human saved his life, he’s fond of them. He is identical with the Hindu god Ganesh. The Burmese regard him as a nat. (see photo of Maha Peinne statue from Mt. Popa’s nat shrine). However, that didn’t solve another, even bigger problem. Athi’s severed head was so hot, that it would have burnt the earth if it touched her. So Thagyarmin gave it to seven goddesses for safekeeping and they take turns in handing it over to the next one, which happens exactly on Thingyan. In order to cool the head during this process they are splashing it with water as much as possible. Originally, the purpose of spilling water might have been the ablution of sins that have been committed in the old year. Another reason might have been the prayer for rain in the upcoming agricultural season. Very often, the first rainfall after the hot season (thingyan rain) coincides with the water festival. 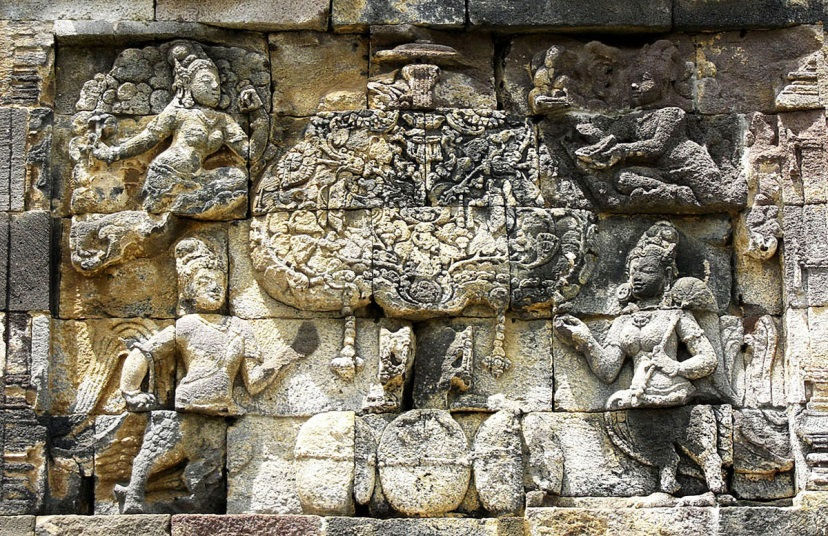 Another legend is based on Thagyarmin’s promise to the Buddha Gautama to take care of mankind. Especially in the second half of the 5.000 years that the Enlightened One’s doctrine would last. This time span was granted on Thagyarmin’s special request. Originally, it would have lasted only 2.500 years. Therefore, he comes down to earth every year during the water festival for a check. Apart from that, he will only come if his throne heats up. This indicates that something went wrong in the human abode. Looking at the world today, I really wonder if he has any time left to spend on his throne at all… According to Buddhist teaching, humanity came down from the upper echelons (bhumi) of Mt. Meru after the destruction of the last world. In the beginning they were ethereal beings, free from the three inauspicious roots (akasamulas), i. e. greed, wrath and ignorance (lobha, dosa, moha). All their needs were gratified by the padetha pin (Sanskrit: kalpavriksha, wishing tree) that was located on the northern continent (Uttarakuru). (see photo from Pawon temple, Java, 8. Century A.D.) We may assume that it left nothing to be desired as it was 15 yuzanas (about 300 km) wide. However, there was one condition: it was not allowed to take more from the tree than one needed. But humanity was overcome by greed (lobha) and started hoarding the fruits of the tree. As could be expected, conflicts ensued and fighting (dosa) erupted. The tree withered away. Then the ethereal beings ate from the sweet soil and became physical. Consequently, they lost their luminous power and became afraid of the dark. Out of pity, Thagayarmin asked the gods of the sun, the moon and the constellations to make themselves visible to humanity. Since then they light up day and night. (Please note the similarity with Adam and Eve’s expulsion from paradise). 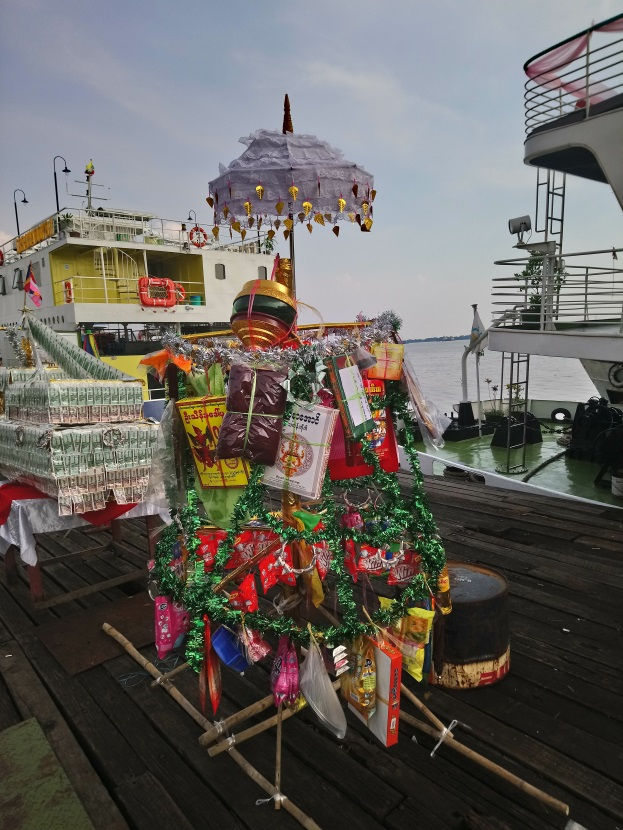 But the wishing trees are not gone for good! Every year they pop up at the festival of Kathein in the lunar month of Tazaungmon (October/November). Then pyramidal wooden structures (padetha pin) can be seen everywhere in the country. The believers decorate them with presents for the monastery. Originally, only monk robes were donated but nowadays all kinds of goods can be seen. Thus, even poor people have a chance to gain merit by hanging a little item on that tree. Even money is donated, even though that is contradictory to the monastic rules, as monks are not allowed to touch it. When the ‘tree’ is full it is brought to the monastery with a lot of ballyhoo! Other activities comprise weaving contests that are held especially on the full moon night of Tazaungmon. Women from various villages compete with one another to be the first to finish a monk’s robe.