Since I have arrived in my newly adopted home town of Pyin Oo Lwin (Maymyo) I was fascinated by its multicultural society. The city was founded in 1885 by the British as Hill Station, with Colonel May (5. Bengal Infantry) playing a leading role. If you add the Burmese word for city (myo) to the colonel’s name, you get Maymyo. It’s that simple. It served as the British governor’s summer residence during the British colonial era. From this time, numerous colonial buildings have been preserved that give the city its special charm. In 1990, the city was renamed Pyin Oo Lwin, which was the name of a Shan settlement that had been there long before Hill Station was founded. Although the city is located in the Shan Mountains, it is a part of Mandalay region. Today it is largely shaped by the military academy, cadets in uniform can be seen everywhere. Pyin Oo Lwin could almost be called cosmopolitan. To this day members of many minorities live here, who played an important role during the British colonial period. First among them are of course Indians from all corners of the subcontinent. I am only at the beginning of my research here and have so far mainly dealt with the Gurkhas (Nepalese warriors), besides with Hindu temple festivals (see my article Deepavali).

Most of the Nepalese in Myanmar are the descendants of soldiers who served in the British colonial army. A number of Gurkhas also served in the Burmese army after Myanmar’s independence (1948). About 8.000 Nepalese live in Pyin Oo Lwin today. Probably it reminds them of their homeland. It is cooler than in the hot Myanmar plains and there are even a few hills. So far I have found three temples in the area that are frequented by the community: the Pashupatinath temple in downtown Pyin Oo Lwin, the Kartikumar temple about 6 km from the city center on the Mandalay-Lashio Road and yet another in Anisakhan, a small town about 12 km from Pyin Oo Lwin.

At the southern end of Aung Zeya Road is a temple complex belonging to the Nepalese Gorakha (Gurkha) community. It is usually called Pashupatinath temple. Which is not entirely correct, because strictly speaking there are two temples: the large Durga temple and the smaller Pashupatinath temple. The former is dedicated to the goddess Durga, whom the Burmese worship as Nat under the name Durga Maedaw. The smaller Pashupatinath Temple has an interesting history, although it is not very old. It was founded in 1964 by King Mahendra of Nepal (1920-1972) during a visit to (then) Burma. The king was considered a patron by the Nepalese living in Myanmar. However, the monarchy has been abolished in Nepal since 2008. The temple is dedicated to the god Shiva, who is worshipped by many believers as the overlord of Nepal. Here in his form as Pashupati, i.e. ‘Lord of the beasts’. This is a very old incarnation of the God, as a similar deity was the object of worship already in the Indus culture (3rd millennium B.C.). In front of the temple stands a statue of the bull Nandi, Shiva’s mount and one of Hanuman, commonly known as the ‘monkey god’. A somewhat crude simplification.

The prototype for this temple is its world-famous namesake in Kathmandu Valley, one of the most important Hindu pilgrimage sites in the world. It is situated on the banks of the Bagmati River, a tributary of the Ganges, and is said to have existed since around 400 B.C.! The temple in Pyin Oo Lwin itself is unspectacular by comparison. Two donor’s inscriptions (one in Burmese, the other in Nepali) tell the story of its establishment. Behind the temple is an interesting labyrinth. In its center stands a round temple that contains a shivalinga (often simply referred to as a phallus symbol). The labyrinth is made of bricks (I suspect) covered with marble slabs. A total of 64 marble shivalingas are erected on the walls of the labyrinth at irregular intervals. Unfortunately, nobody in the temple was able to explain to me what the labyrinth was all about. I was told that it was built on the model of a similar structure in the Pashupatinath temple in the Kathmandu valley. However, I am not aware of such a building there. Even friends who know that place better than I couldn’t help me. Behind the labyrinth is a smaller temple with the nine planet deities (navagraha). These differ significantly from their Burmese counterparts, e. g. the northeast is dedicated to Shiva in the form of Ishana (see Isan/Thailand), while in Myanmar the eagle (Garuda) is its symbolic animal.

In this temple I witnessed the Shivaratri (The night of Shiva) festival. It is one of the most important for the followers of this God. They are called Shaivas. It always falls on the night between the 13th and 14th day of the Hindu month of Phalgun and symbolizes the victory of light over darkness and the end of winter. In popular belief it is interpreted as the wedding of Shiva and Parvati. Unlike most Hindu festivals, this one is celebrated at night. It lasts for three nights, the highlight being the last night. Thousands of oil lamps are placed in the temples. Everywhere offerings, mostly fruits, can be seen. There is fasting, meditation, prayers are said and the mantra OM Namah Shivaya (OM is the name of Shiva) is recited non-stop. That day I saw a procession in the labyrinth for the first time. Many women with children walked through its narrow alleys and milk was poured over the shivalingas. A number of believers left clothing there as offering. It was an incredible evening with hundreds of believers, many of them dressed in festive robes. Some performed their pious deeds there, others just stood and talked. Many believers had gathered in the festival hall and listened to the music. 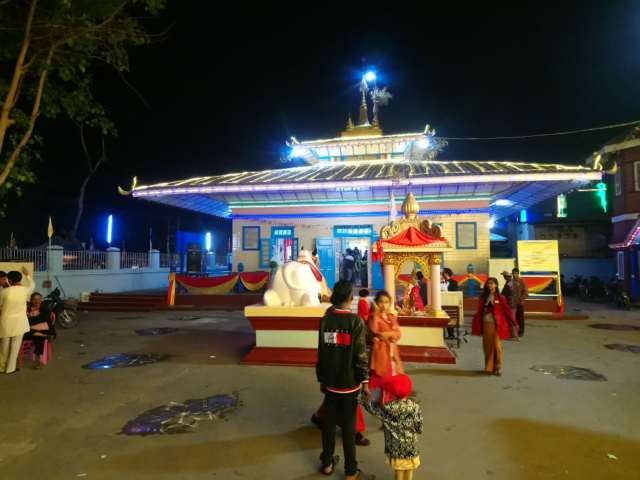 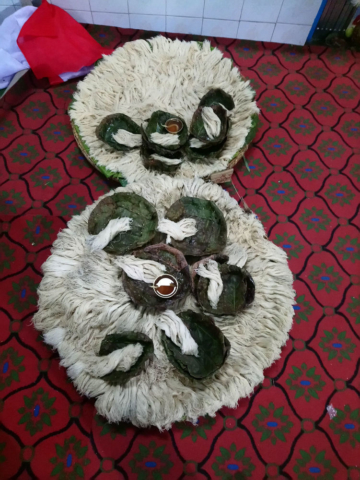 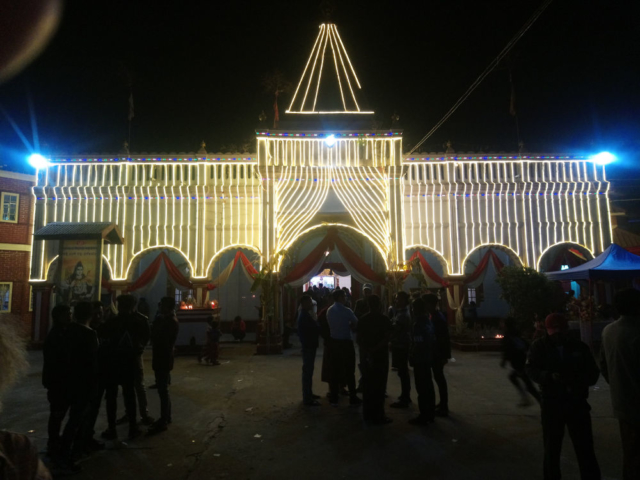 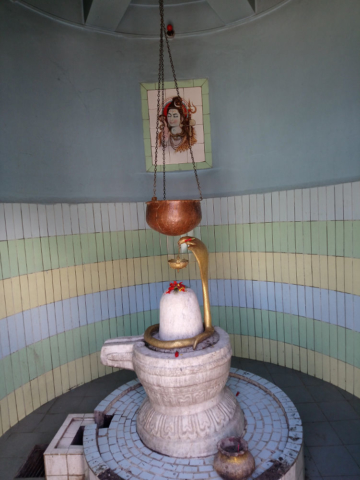 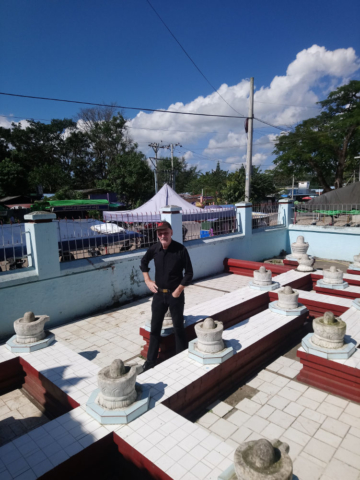 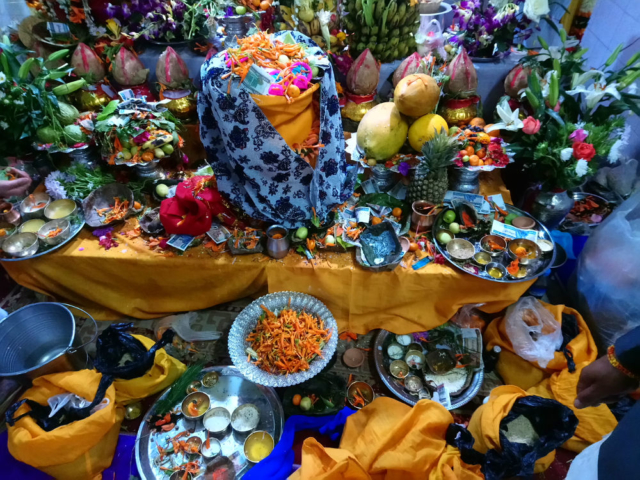 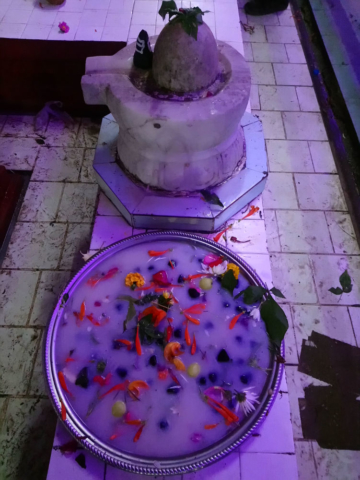 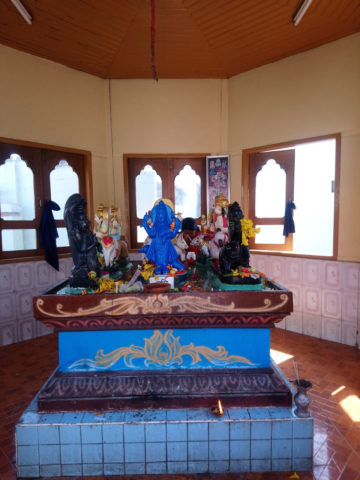 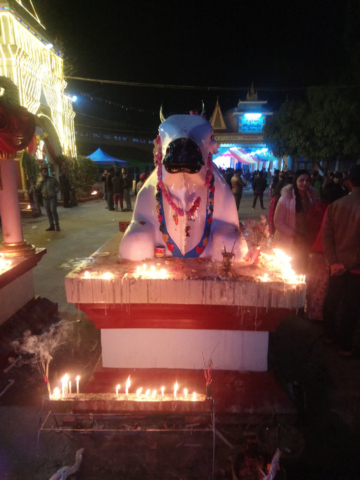 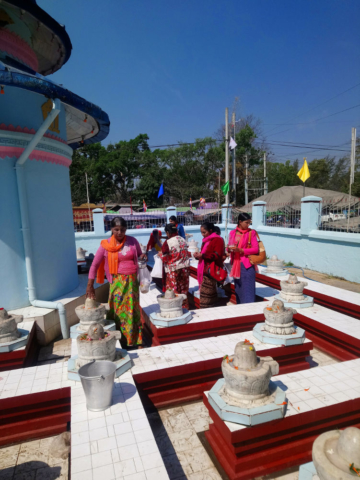 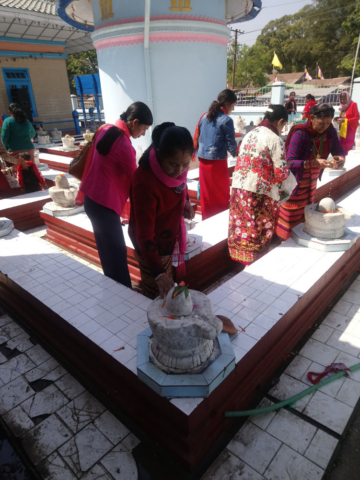 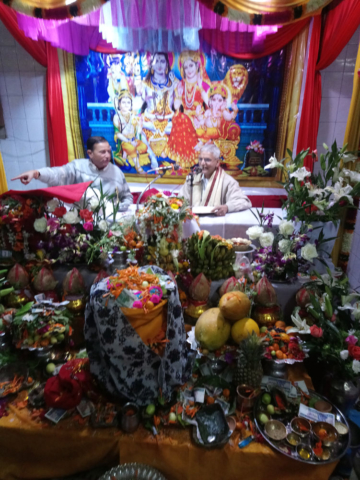