Last Sunday I had a very special evening. Maymyo has a significant minority of people from the Indian subcontinent. Accordingly, quite a few temples and mosques can be found here. Deepavali (aka Diwali) is the festival of light for the Hindus. It symbolizes the triumpf of light over derkness, good over evil and wisdom over ignorance. It is a gazetted holiday in predominantly Buddhist Myanmar. Which isn‘t much of a surprise, as these guys hardly miss a chance to party. All houses, shops and other buildings that are occupied by Hindus are brightly illuminated and religious music is to be heard everywhere. In many homes mandalas are painted on the floor. These are geometrical configurations, very often with a religious content. Sometimes only used for decorative purposes. And of course oil-lamps are lit everywhere. As can be expected, the most brightly lit and decorated places are the temples.

According to my information, there are three Hindu temples here in Maymyo:

With my bicycle I went to those temples to have a look at the ceremonies there. It seems that ghe Gurkhas (Burmese: Gorakha) prefer to celebrate at home. No doubt, there were mandalas painted on the floor. But the congestion was rather limited, to put it friendly. At least a priest (brahmin) was present who dabbed a red dot (tilak) on my forehead for as little as one thousand kyat. A pity, as this temple is a very interesting one! The ‚Indians‘ in the Krishna temple seem to share the habit of celebrating at home. Only a few visitors strayed by while I was there.

The Ganesha temple offered a completely different picture. A big mandala decorated the forecourt of the temple and there were quite a few of them inside, too! All around there were oil lamps (one thousand it total if I may believe the brahmin) that were lit a exactly 8 pm bby the believers. The ladies were dressed in their most beautiful saris. Tamil religious songs were played from a cassette. I have studied Tamil at Berlin university several decades ago. So I was able to show off with a few words and proverbs I remembered from those long gone days. Oru nalla matukka or adi, oru nalla manithanukka oru col (‚A good ex needs only one blow. A good man only one word‘). Or how about this one? Panam enral, pinamum vayeit tirakkum – Say money and even a corpse will open his mouth! And when finally I deciphered a few words in Tamil script everybody was sure that a true man of genius must have found his way to the temple. Then I vaulted into the saddle and pedaled home. 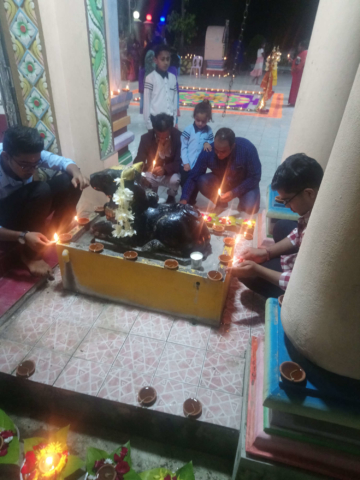 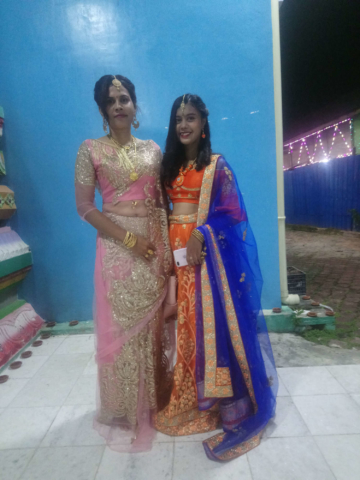 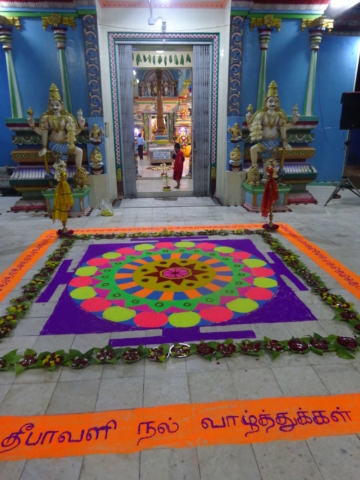