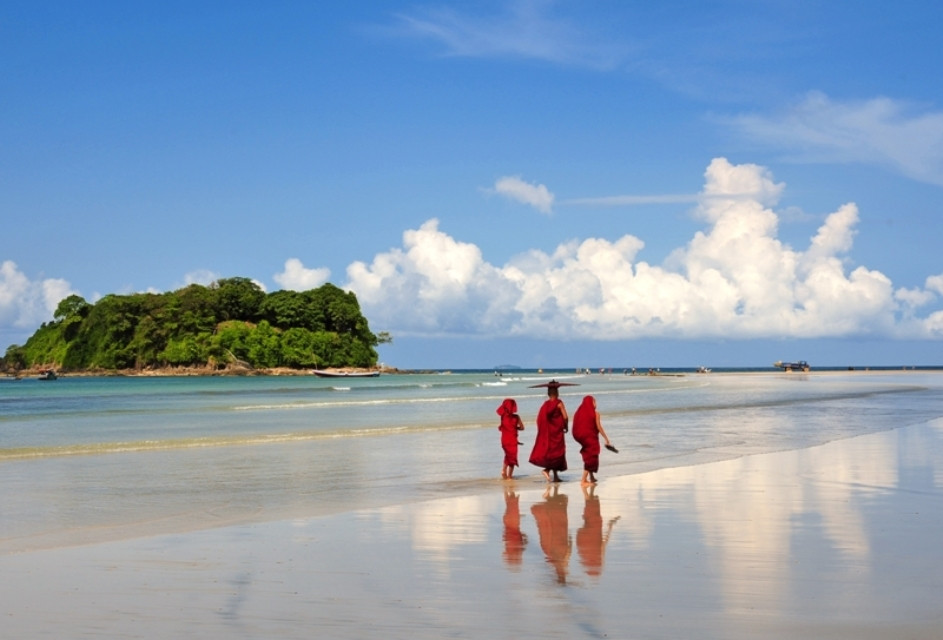 In early May 2019 we (Tobias and Htet Htet, Martin and his wife Bee plus Ei Ei and myself) rented a comfortable car and set out on a 14-day tour of Myanmar. As Ei Ei and I had been to Ngewsaung beach several times, we joined them in Pathein. We liked the capital of the delta as it has kept a lot of old Burma flavor. Although a big shopping center has opened recently. Much to our surprise (and joy!) we found genuine HARIBO jelly bears there. Hard to find even in Yangon! We grabbed our chance to restock on our provisions! We stayed at the newly opened ‚The First Hotel‘, conveniently located at the city’s ‘Corniche’ – if it can be called that…

It takes only one hour from Ngwesaung beach to Pathein. Our friends stayed at the Shwe Hintha Hotel – simple but good, located directly at the beautiful beach. We headed north over the southernmost part of the old Pathein-Monywa Highway. The highway connects the delta with Monywa, the main town of the Chindwin Valley (Sagaing Region). It runs on the west bank of the Ayeyarwady River. The Burmese government built it in the 1950s to circumvent the rebel-held areas on the east bank of the Ayeyarwady. A few miles south of the village Alezu we left the highway and turned west.

We crossed the Arakan Mountain Range (Rakhine Yoma), which separates the state of the same name from the rest of the country. The mountain range follows the foothills of the eastern Himalayas (Chin Hills) and runs in north-south direction forming an arc. It is sparsely populated and the roads linking Arakan to the ‘rest of the country’ are rather bad. The narrow strip of land between the mountains and the Bay of Bengal, however, is one of the most densely populated areas of Myanmar. The height of this mountain range decreases to the south, until it seems to disappear in the Bay of Bengal near Cape Negrais. Which is a wrong conclusion: It continues south over the Andaman and Nicobar Islands all the way to Sumatra.

Arakan (Rakhine) State has been in the headlines of the international press for a considerable time. The conflict between the native Buddhist Tibeto-Burman Arakanese and Bengali immigrants (who call themselves Rohingya) dates back to British colonial times. In 2018 it culminated in the expulsion of several hundred thousand Muslims to Bangladesh. In addition, there has been a conflict for some time between the ethnic Arakanese Arakan Army (which seeks independence) and Burmese government forces. This conflict has led to several skirmishes with fatalities on both sides. The population – as happens all too often in Myanmar’s ongoing civil wars – got caught in the crossfire. As these events take place predominantly in the north of Arakan, it didn’t affect our trip.

There’s a check post at the border between Ayeyarwady Region and Arakan State. Immigration authorities had a look at our passports and our names were recorded in a voluminous book. Foreigners seem to be quite rare up there. An hour later we reached the town of Gwa, romantically located on the Bay of Bengal. From there it is still about an hour north to the town of Kanthaya. A bad road leads to the sea and finally our destination: the Arakan Nature Lodge!

The beach at Arakan Nature Lodge

It is operated by a male nurse from Switzerland named Ueli, who’s been living in Myanmar for quite a while. As he told us, he had worked for an NGO in Sandoway. Then he got the offer to take over this resort and he accepted it. The Arakan Nature Lodge consists of several fairly comfortable single-storey bungalows and some two-storey buildings, each one containing two rooms. Some of the bungalows are right on the beach, the rest in the second row.

We found the prices comparatively high (over 100 $). It should be noted, however, that all meals are included (full board). The food (a bit on the vegetarian side) tasted good, although the servings tended to be a bit small sometimes. Ueli and his team go to great lengths to pamper their guests. Solar powered electricity is available from 6 in the evening until 7 in the morning. There is no air conditioning or fans, which was O.K. for us (in the hot season!) as there was always a cool breeze from the sea. However, it tended to get a little unpleasant in the afternoon.

The toilets are not equipped with water flushing. After use, a mixture of rice husks and whatnot is sprinkled in the toilet bowl. The result was satisfactory as no bad odour came from the toilet. The guests were mostly expatriates based in Myanmar. At the time of our stay there were several couples with children visiting. The highlight – as can be expected – was the beach. It was exceptionally beautiful and practically deserted. Now and then we saw a few fishermen at the waterside. 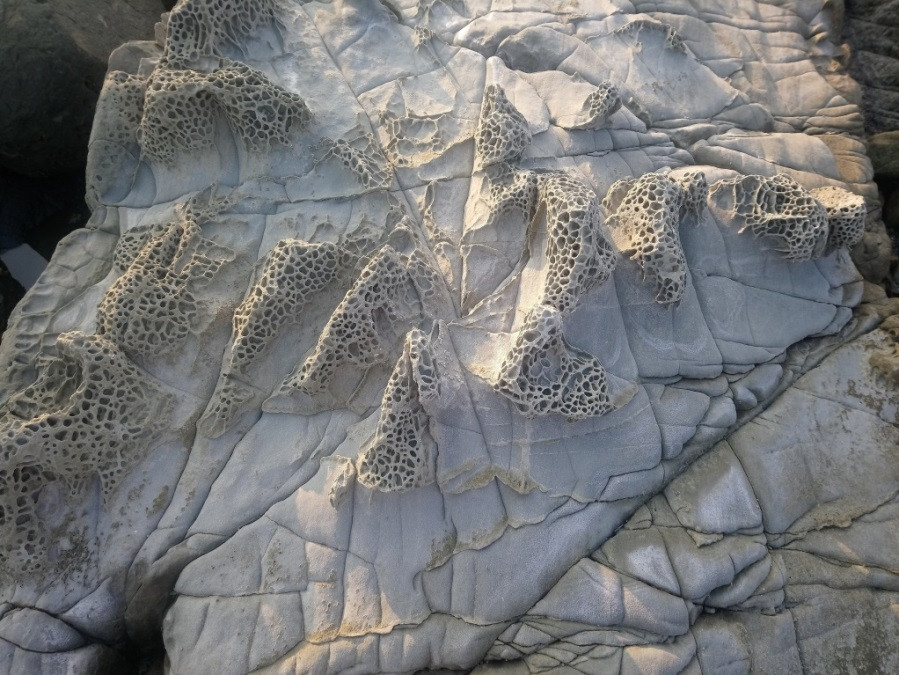 A beach like this one can actually be found in catalogues only. It is ideal for swimming, even for children. It takes a while before one reaches deep water. At the northern end of the beach we found very interesting, bizarre rock formations (pillow lava, see above). We did not dive or snorkel there. However, what we saw from above was impressive! The resort provides masks, fins and several watersports equipment for free. The journey to the beach is – not surprising in such a remote location – a bit difficult. It takes about eight hours by car from Yangon. A less strenuous journey goes via Ngapali/Sandoway, which is easily accessible by plane from Yangon. From the small airport it takes about three hours by car to the resort. There are quite a few pristine beaches on the way. In Kanthaya itself we saw a few guest houses and hotels that were catering for locals.

Our next stop was aforesaid Ngapali. There is a lot of hectic bustle going on there. It reminded me a bit of Kuta Beach (Bali) in the 70s. With one exception: there’s no night life in Ngapali, of course! We stayed at the Yoma Cherry Lodge, a nice resort north of the main beach. Unfortunately, the bay is also used by many fishermen as anchorage. So it often stinks of diesel, and the fishermen go about their work. The beach is therefore not very attractive. With the car it takes only a few minutes to the main beach, which is ideally suited for swimming. Our ranking of the beaches we’ve visited would be as follows: Arakan Nature Lodge would come in first, followed by Ngwesaung and Ngapali.

After three days in Ngapali, we hit the road to Pyay, located on the eastern slope of the Rakhine Yoma. The road headed north to Taungok. From there, the main route leads east over the Rakhine Yoma to Pyay. The mountain range here is higher than further south. The border between the Rakhine State and the Bago region runs along the crest of the ridge (about 1,300 m high). At the border the usual check and then we went to Pyay (Prome). We arrived there in the evening. To my astonishment, the mountain range was rather dry, the vegetation largely withered. Although it is located so close to the sea. And my astonishment became even greater when the next mountain, the Bago Yoma, was already considerably greener – although much further away from the sea. And to make the picture perfect, the farther eastern Shan Mountains were the greenest! This is likely to change fundamentally with the onset of the monsoon. 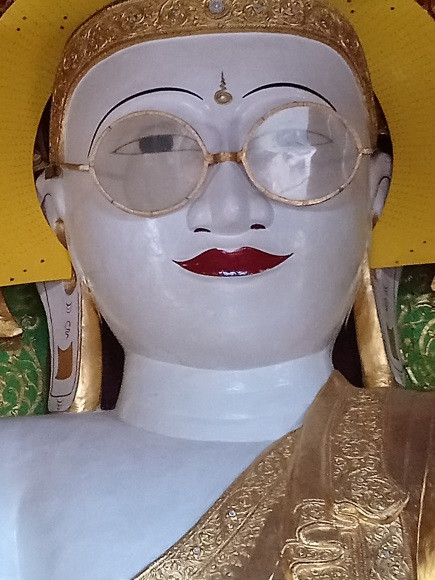 Pyay, formerly known as Prome, is a fairly large town on the east bank of the Ayeyarwady River. A huge bridge connects it with the west bank. Besides the usual pagodas the city doesn’t have a lot to offer. We stayed at the Lucky Dragon Hotel, totally o.k.! However, it is likely that the newly opened Pyay Garden Hotel will be the city’s No. 1 soon. If you enjoy the good old Burmese socialist style, might be comfortable at the Mingala Garden Resort. The sights of the city are a little bit out of town. On the one hand there is the spectacled Buddha in Shwedaung. It It has become an important pilgrimage center! A Briton, whose wife suffered from an eye disease and was cured here, donated the glasses in the 1920’s. There have been several attempts to take off the glasses. They all ended in disasters of various kind. Finally, they just let it be. It takes nine monks to clean the glasses every fortnight!

Certainly more interesting is Sri Kshetra. The Burmese call it Tharekittaya. It is the last of the great cities of the mysterious Pyu people. They played an important role in the country’s early history. The big city was overwhelmed by enemies in the 9th century A.D. and its inhabitants were dispersed in all directions of the compass. The ruins cover a large area. They are considerably older than the buildings in Bagan. A small museum tells the story of the city. The Pyu ‚invented‘ the so called gourd stupa (Bu Hpaya), so called, because it resembles a gourd. In addition to the big stupas Hpayagyi and Bawbawgyi especially the Laymyethna-Tempel with its four entrances (the model for all later temples of this kind) deserves attention. The ruins convey a serene impression and one can easily spend a day here. Quite contrary to Bagan, you’ll hardly find any visitors there. 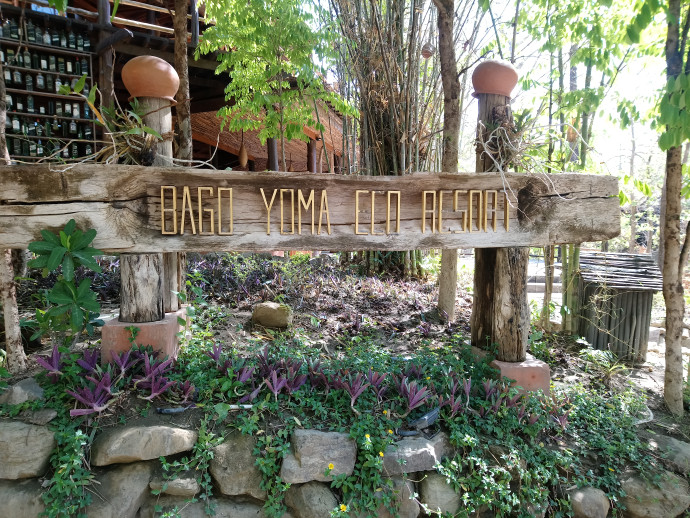 After visiting Sri Kshetra we headed east to the Bago Yoma (Bago mountain range). It extends from Mt. Popa (near Bagan) in the north over several hundred km down to the south and ends in Yangon. Theingottara hill, on which the Shwedagon pagoda stands, is the last spur of the mountain range. It is not particularly high but an important center of forestry. Most of Myanmar’s teak logs originate here. You can still see elephants at work there. It is possible to visit the camps by appointment. Unlike other camps (like Poe Khyar Camp) this is the real thing! We stayed at Bago Yoma Eco Resort, which is located on the western slope of the mountain range. It was tastefully decorated and we stayed in comfortable beautiful bungalows. We even had aircondition at night! From there, one can mak trips to the Bago Yoma. Wild elephants and even tigers roam the forest. At least I read in the New Light of Myanmar that poachers had shot a tiger there and were severely punished. We left the lodge after lunch and reached Toungoo in the late afternoon. 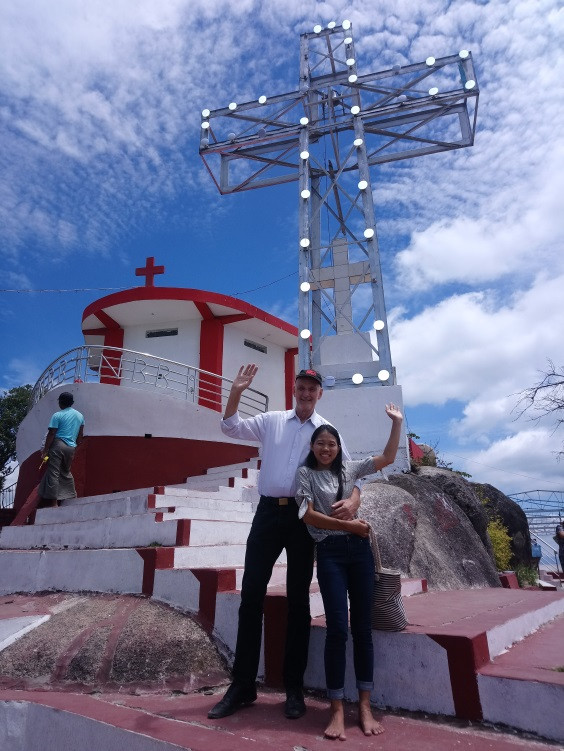 Toungoo is the nucleus of the second Burmese empire (16. – 18. Century A.D.). Later, the kings moved the capital to Bago (Pegu) and then to Ava (Inwa). The huge palace is a reminder of past greatness. We stayed in Myanmar Ahla (Myanmar Beauty Hotel). A hotel that has seen better times! Soon a large new building will be opened next door. Obviously, the owners count on a strong increase in tourism. Even in this remote area. Let’s hope so, by goodness! We used Toungoo as base for an excursion to Thaundaungkyi. After leaving the dusty plain, we reached a beautiful green mountian world. As mentioned above, the greenest of them all!

We had to pass the border to Karen state (no check post!). There are many Christians living in that state and Thandaungkyi is an important pilgrim center for them. On a mountaintop rises the ‘biggest Christian cross of Myanmar’. It is made of steel and due to its good lighting it is also visible at night. Up there we met a lot of nice people! We returned to Toungoo and there we parted ways: Tobias, Htet Htet, Martin and Bee drove to Yangon. Ei Ei and me continued to Bagan and then on to Mogok (see previous blog entry: “RUBY LAND – A trip to Mogok“).